Bruce has written three short stories that connect to the Unicorn Chronicles. E-versions of all three of these stories will soon be available at brucecoville.com. For now, they are all available as e-texts on Amazon and Smashwords.

The Guardian of Memory

Just shy of being a novelette, this story-within-a-story features Grimwold telling the tale of how the departure of the unicorns for Luster affected the human population of Earth:

When the great migration was over, and the last unicorn had left, it was as if the earth itself sighed with loss and sorrow.
For what is a world that has no unicorns?
That loss and that sorrow grew within the hearts of those who lived on Earth. Even those who had never seen a unicorn, never heard of a unicorn, felt the passing of something sweet and wonderful. It was as if the air had surrendered a bit of its spice, the water a bit of its sparkle, the night a bit of its mystery.

What happens when one girl decides to do something about this sense of loss and bereavement is the heart of the story.

Get The Guardian of Memory on Amazon or Smashwords

The Boy With Silver Eyes

This story is set after the time when the Guardians of Memory were established. When a Hunter catches and kills the Guardian named Streamstrider, he does something unthinkable, something that will affect his son, Nils, for his entire life.

So Nils, who felt as if he had grown roots himself, lay still and listened, slowly and deeply, in a way he never had before. And as he lay there, nestled in the tree’s roots, it murmured to him of the forest secrets, telling him it had waited hundreds of years for a human who could hear it.
“You have a long road ahead,” said his new friend. “Seeds that are just sprouting will be trees many times your height before your heart will be at peace. You must learn to sing four things: the songs of the Earth, the Fire, the Water, and the Air. Three to save a life, the last to put your own soul at rest. This I know from the soil on my roots and the sun on my leaves, from the rain and the wind, which carry me news.”
This took many days and nights to say, of course, and Nils stayed all this time without moving, locked in a sort of trance.

The story features a brief appearance by Ivy Morris, and also explains how the song called “The Song of the Wanderer” came to be.

Get The Boy With Silver Eyes on Amazon or Smashwords

After the Third Kiss

A full length novella, this tale is not set in Luster. Instead it tells the full story of the origin of the dragon Graumag, who plays a crucial part in Volumes 5, 6, and 7 of the Unicorn Chronicles.

Inspired by the old Northumbrian tale The Laidly Worm of Spindleston Heugh, this story explores what happened after the maid May Margeret was released from the curse which had turned her to a hideous dragon. After all, once you’ve been a dragon, it’s not easy being human again.

It started slowly, this desire of mine. At first it came only at night, when I would lie abed but in my dreams be soaring once again above the countryside, my wings spread wide and all of heaven, fiery with its myriad of stars, stretching endlessly black above me. In these dreams I flew until the moon was in my reach, then swooped to devour once again the sheep and the kine, feeling the crunch of their bones and the hot spurt of their blood as it poured down my gullet. When I woke, I would find myself tangled in sweat-soaked sheets, hardly knowing whether it had been dream or reality.

Get After the Third Kiss on Amazon or Smashwords

Check out these illustrations by the very talented Michael Welply, from the Italian editions of Into the Land of Unicorns and Song of the Wanderer! 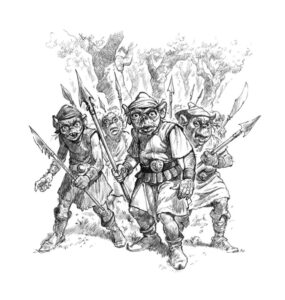 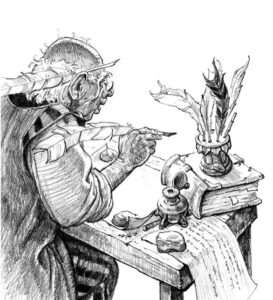 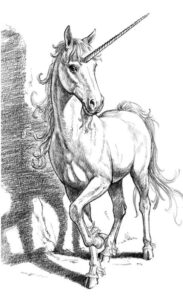 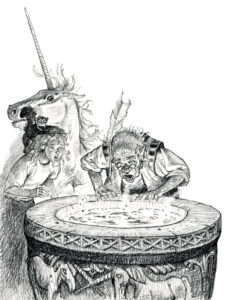 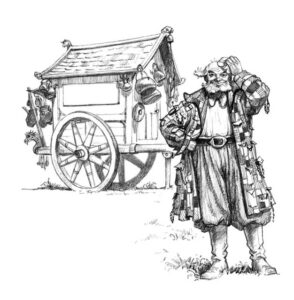