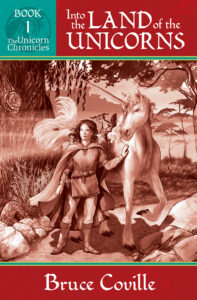 “The Magic is Everywhere”

As each bell chime sounds, Cara pushes herself faster up the steep bell tower steps that lead to the roof. Eleven! She must be on the roof when the next bell tolls. As she races up the stairs. Cara can’t believe everything that has happened. Wasn’t it just a few minutes ago that she and Grandmother Morris were peacefully walking home form the library? When did that mysterious man start to follow them? What does he want? Where did he come from? Who is he? Twelve! The ringing bell brings Cara back to the moment. Gramma told her what she must do! With a deep breath, and only half believing she will be safe, Cara jumps off the church roof and into the adventure of her lifetime—into the Land of Luster, the world of the unicorns.

In Luster, Cara meets the Dimblethum, the Squijum, and the most magnificent of all the inhabitants, Lightfoot, a rebellious young unicorn. Together the new friends set out on a quest—to reach the Unicorn Queen and prevent the destruction of all unicorns.

“…the book should find a favored and well-deserved place on most shelves.”—School Library Journal

“Coville weaves traditional unicorn myths into this light, accessible fantasy and provides a neatly contrived ending that hints at the next adventure.”

Click here to buy Into the Land of the Unicorns on brucecoville.com